The information and technical advantage remain the policy-making in Pakistan. The political environment and interest groups are two ways to get the same approach but not in legal approach. Policy implementation is not just possible in any aspect under such circumstances. The alignment of goals or objectives are always beyond process illegally mentioned and implemented in Pakistan. Although ruler-dominated bureaucracies have their own ways to deal with political authority. Military-dominated bureaucracies, ruling bureaucracies, representative bureaucracies even party state bureaucracies remain in touch with such political authority to understand the political environment and authority matters. 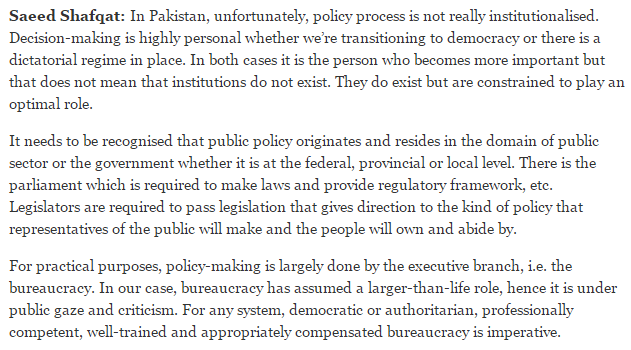 One had shifting regimes in books of history because administrative and military perspective overlapped many times. Therefore there is entire difference between post-independence period and other notable events in history. Colonial masters have their own perspective towards the policy making in post-independence period for Pakistan. The role of Civil Services Of Pakistan renowned in playing such role. The 1971 tragedy observed another day related to policy implementation in Pakistan. One has a question in mind about the policy implementation here at this stage that why should each perspective is dealing with the personal interest while deciding about national interest. It does not reflect in any case that there is no institution here in Pakistan to cater policy implementation.