Theories in International relation provide a clarity lens to defend the cultural bindings with different ranges so far. Countries those are relative with activities in terms of difference of opinion showed that the comparison with classical Realism is important to initiate such different strategic programs in reality. (Keohane, 1986) 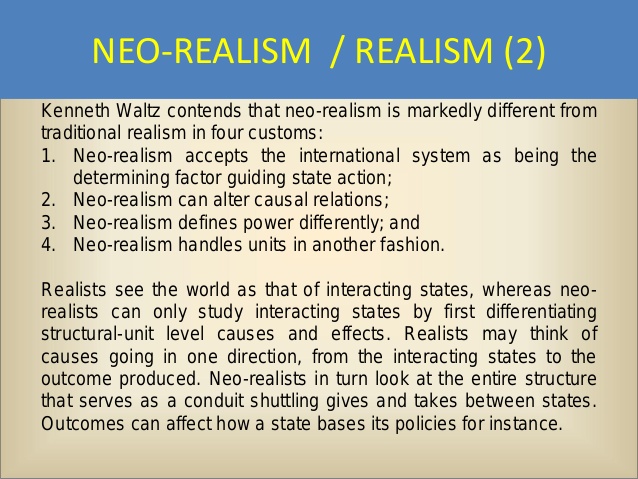 The Neo-realism paradigm behaves actively with the classical one because both platform acts upon information that has been penetrating at state level since the conception of this education area indeed. The state system is important because it is divine in various platform and most important on human aspect so far. (Keohane, 1986)

The human structure is partially negating as compare to the anarchic one and the main aspect is about the happening with various level. The international system that are always getting the system approach so that the system should provides the way in reality. The other two ways in considering Neo-realism in the optimum approach are offensive realists and in comparison the defensive realists. In offensive realists, the survival is only visible through the entire comparison in realistic manner with differential way. (Keohane, 1986)

The offensive approach, most of time starts with the rigid behavioral approach of one states and it forcefully ignites other state’ behavior because both wants a win situations but refuse to think about the other’ disruption so far. In offensive approach of realist, the hegemonic circumstances are obvious in informing the way that is directed towards the strategic alliance. (Keohane, 1986)

The other way is about the defensive realists and such way is being adopted in that condition when the unwise strategy is considerable for the state survival. The peers within the state are considerable in rivalry because state have no other option left to fight against them. (Keohane, 1986)

The last but not the least is about the polarity and such polarity is about the distribution of power only among those state agents that are great powers of this world only. This last mindset is the key concept in the Neo-realism and behaves with the full realistic approach. (Keohane, 1986)