The Liberalism has been glaring in political economic paradigm since establishment of 19th century ideally. The core endorsers of this concept in economic debates are globalization and dominance of western mindset of economy. If one say that Liberalism is instilling in modern economic policy than it will not a false statement.

The United States when revised liberal ideas and conceptual frameworks during Second World War it was named as Liberalism. The hallmark in history of liberalism has happened with establishment of World Bank and IMF in economic span. There are many approaches in liberalism but these approaches did not do well in identifying rich legacy. Historically, there was huge sum of money that devoted for the protection of mercantilism above economy. 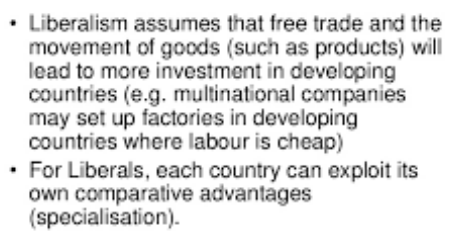 Further, Liberalism is being provided as per individual desired in country’s economy. The promotion of individual enterprises is inherent in Liberalism approach of political economy. In individual-centered economy, the basic realization is about to happen with no affect of market forces indeed. There is concept of individualism rises with several scholar’s thinking about liberalism.

The individual liberty can provide way in which there is bounding on individual property development. Such free development is about the liberal politics within International political economy. The other way to think about Liberalism is market mechanism. The market reacts without any consideration and did not believe in customization.

Everyone in market is a single entity but it does not mean that market is there to facilitate them essentially. For example, everyone in market plays its role and there is no binding at all. The market is place where allocation of resources is about to happen with maximum facilitation for individuals. The labor that can be individual in any form is core element in development of market and even global economy can build through labor specialization.

Further limited government has some specific roles to play in economic liberalism. The government is superior role to play in economy and labor cannot always like its intervention. Therefore, labor endorse phenomenon to limit government. Further market even did not allow to be a reluctant agent of society could hurt resources of market in any way.

The no or least intervention of government can increase individual development on one end and societal development on other. Last but not the least, the conceptual framework of liberalism can consider progress in history for upcoming activities in free trade market. There is liberal principles dully authoritative by society and individual. These principles tackle economic and political potentials ion best way. The coherent political and economic activities with those principles can bring peace and prosperity as everyone demands.