The Women and Development (WAD) approach is important to humanity in general and women in specific because the human being always in pursuits for the justification tool for the domination of men over women. One can say that the WAD approach to gender considered and sometimes endorsed the patriarchy existence in the society and also buzzed that this existence cannot ignore in any case. The radical thinking at feminist platform also have the implicit wish for the creation of new system because the new and improved system enriched with the myths of feminism should available and presented here for the betterment of society. (iimk.ac.in, 2015)

This suggestion of alternate social institution is the best approach to show that the community is still having the traces of development with respect to women and issues. This creation of new system always preferable when it is highly against the men ability to dominate. This approach is not a separate from all aspects but there was also some NGOs at government level exists so that the system-thinking can penetrate in to society and always behaves with the best possible method. It was known fact that patriarchal domination is the way to exploit resources without disrupting the maxim in any case. (iimk.ac.in, 2015) 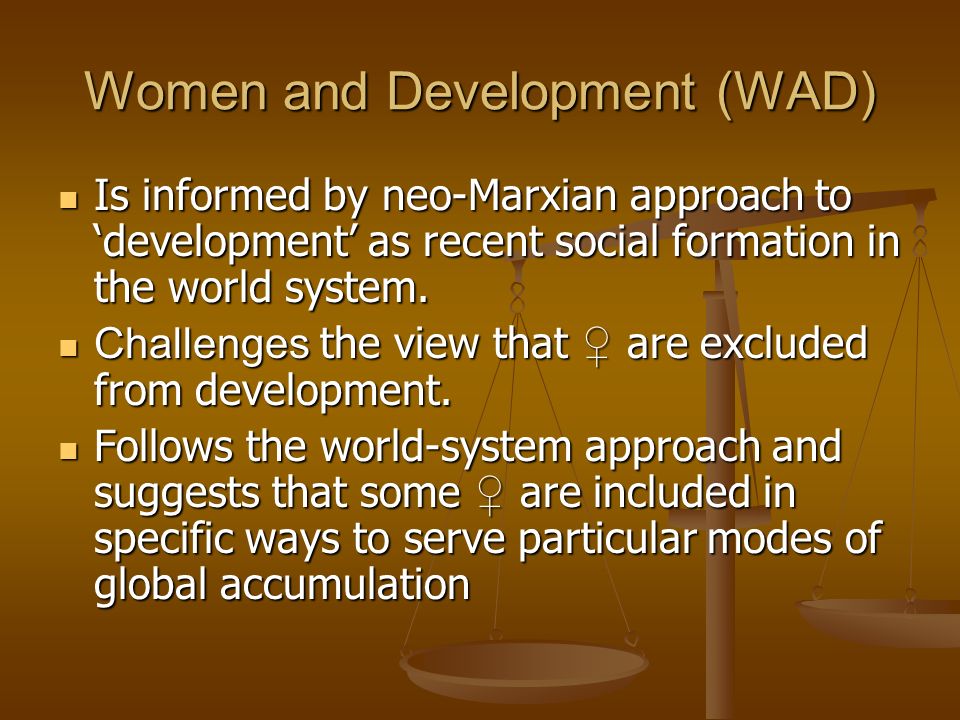 It is very difficult to fight for rights for women when the culture is there in the side of men and also accepts the domination of men in different ways. This developmental approach to gender is more risky than WID and GAD because it wants to create the social structure within the society without alarming the men domination. The differentiation starts when the women’ structure in the society was considered as the entire different thinking and way to perceive the women in the society. The academics did a lot to enhances this mindset in the society. The working opportunities and situations needs a entire different way and this need was first identified under the WAD approach to gender. (iimk.ac.in, 2015)

The goals allocations to the men was different, therefore, the scholars of the WAD approach created the new goals for women so that women maxim could rise in society with all its element approach. The next thing about the WAD approach was that the WAD approach discussed the women’ responsibilities in the complete form to formulate such structure that is sufficient at least to remove the oppression at women level. For example, Africa was considered as the main hub that made easiness in formulating such agenda for women under this approach. The agriculture sector of the Africa have some elements while producing the bulk of agriculture products in all systems. (iimk.ac.in, 2015)

That agriculture domination at women perspective enhanced the level for women both at national and international platforms. The scholars, thinkers and in large number of women who launched campaign decided to change the exists rules and policies so that the women issue can provide a solution. There was two types of organization of women element available in than society. One type of the separate women structure that demanded enormous patient and have the lowest result and other is about the integration framework and it looks more important and proper function able in different terms. (iimk.ac.in, 2015)