The First meeting , 1975, has the same objectives against the equality of the woman in that era as the today’ United Nation Conference on women have. Although there are many lowest number of participants were there in the community that show what is good about the women status in this world within the boundary of women right in the best approach. The only 133 government officials took part in the conference that endorse the future of the women’ status in the world. The major role that was played by the Nongovernmental organization to increase the women sector on equality basis. (unwomen.org, 2015)

The basic principles that has discussed over there in the conference was to confronts the world action pan against the implementation of the women ‘ maxim at large scale to fulfill the way as it is being decided already. The 1980 was another year that felt need to get the discourse over the women issues and agendas related with the oppression of the women. About 145 member states come close to each other and discuss the matters of education, employment and even health at large scale in which the discussion matter a lot and the member states discuss. (unwomen.org, 2015) 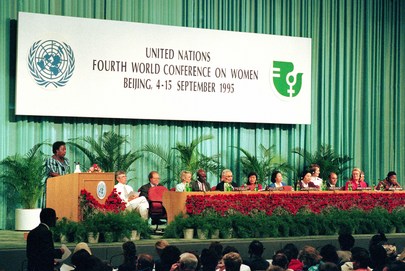 The ownership right of the women was also considered u9nder the same conference agenda. The inheritance is another agenda that was considered as important as it should be so that the one level transfer may be possible to cover the next level progress so that the general awareness could boast. In 1985, Nairobi, was the place where the UN decades specifically for the women, got the agenda to discuss the previous achievements and possible pragmatic strategies to overcome women issues. The Decade’s goals are discussed in the way that show what is the best possible in achieving the intention of the women and about 157 member states were true witness of those talk. (unwomen.org, 2015)

The paradigm shift has been observed under the women oppression and equality mindset that the community should endorse that the gender equality is the major issue and should be tackle in as possible as it should be. After the third wave, in 1995, Beijing proposed the outline agenda to discuss that the women elements in the community are highest in demand with different perspective. The conference have the Beijing Declaration through the simple form of action is explorative in nature in different terms and conditions. The women throughout the world endorsed the new ways of thinking about the women as given in the global policy document on gender equality. (unwomen.org, 2015)

There are about 12 critical linkages were considered through the systematic approach that show that women and poverty link is the first mind. The education and training of the women in almost all fields of life is another task that is glaring in providing the real myth behind the women. The women and health of the community is not an old concept and still applicable in different aspects. The violence culture has been disrupting the nature of women equality at academic level. The armed conflict along with women is another way of reckless issues that are highly concerned with the ability of gender to run the smooth way of activities. (unwomen.org, 2015)

The economy and economics activities are two way concept that may affect the women culture in the society. The right to become the powerful image by getting the various approaches towards the image is being considered over here. The institutional way is another thing that show the procedural mechanism cannot ignore in the community. The human rights is the other systemic approach to got the real image of women and oppressions upon her. The media role in endorsing the elements of the society and even sometimes negating the full story behind the women. The environment approach to discuss the women at large scale is another way to do the discourse so that the women should implement in the further paradigms. The last thing to discuss about the nature of women is “The girl-child” in different look and show that how community treat with them in little age. (unwomen.org, 2015)