The irony at women platform starts when the thinking is both shifting from WID to GAD so that the real issues behind the oppression on women can obtain and may be amend accordingly. The system that are involved in the United Nation to get the real maxim behind the women issues starts piling up at National level. The agencies that are highly centralized in working with the best approach show that the community is endorsing the role of women in different approaches so that the system could retain its originality. (Razavi & Miller, 1995)

The conferences under the United Nations show that the community is responsible for the reckless conditions of women in that time and the same community can only addressed with the amalgamation of women sector with the such agencies under different official bodies of different countries. Such intervention made the women issues more glaring in society officially and finally this paradigm got the success through the majority of people. The United Nations along with its debate corner is the biggest paradigm that thinks about the women and it finally draw attention of women under the development process. (Razavi & Miller, 1995) 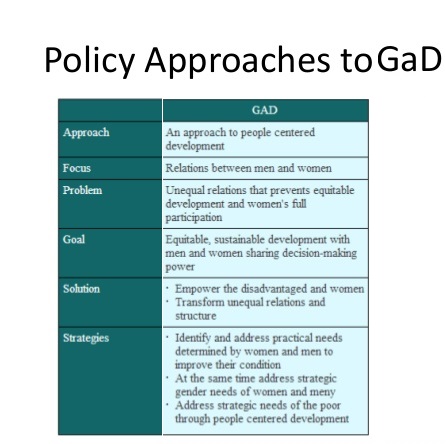 The dual platform was achieved and these two platform comes close to each other with national and international settings. This new thinking articulate a new way that endorsed the reality according to different concerns. In 1979, the Elimination f All forms of discrimination against women was raised and still traces are found even in this age. This new way alter the thinking, thinking that show gender as the part of social and cultural since origin, thinking hat show the physiological way is not satisfactory meets all demands in the relative approach and thinking that social relations at earth matter a lot with the introspective approach. (Razavi & Miller, 1995)

The gender relations with different meanings and different ways always descriptive in nature and perceptive in action. The relationship between the gender is the explorative in nature because it show that women; doing is another thing as the men in active manner. The doing of men are almost visible in the culture and women, up to some extent are not glaring in comparison. The sociological approach describe the relations as the total positive attitude in any way. The gender is proved through the identity and this identity is much demanded in every way. This gender identity is depends upon the social construction for the immediate decision-making. (Razavi & Miller, 1995)

It cannot prove wrong that sociological approach is traditional and this traditional approach is still not outdated in any case. There are about four institution while drawing any conclusion from the GAD approach to gender and these four institution have some rules and regulations to apply. Categorically, these institutions are household in first hand, market in second one, state is the third one and community is the fourth one platform to discuss the things in the integral way. For example, the biggest enforcement was got by the women segment by the launch of volume named as Of Marriage and the Market in 1981 and this volume provided the great understanding in different ways. (Razavi & Miller, 1995)